A great story about a first timer’s guide to visiting helsinki, finland, Read about the things to do in finland for a perfect travel experience.
T
Travel Melodies

We’ve crafted this travel guide to Helsinki with a mission to help all who plan on visiting Helsinki, Finland, and are looking for detailed yet crisp information. So, grab a cup of coffee or tea and read on.

Before You Plan a Trip to Helsinki

Helsinki, fondly known as Daughter of the Baltic is full of life. Helsinki stuns its visitors with its simple yet beautiful charm.

You can’t help but awe at magnificent design and architecture as you walk the streets and squares of Helsinki. Finnish cuisine is as famous as Finnish design.

From strolling its historic lanes to hopping its islands to chilling at its beaches to hiking in its forests to stretching a leg in its urban parks and gardens to cozying up in its world-class sauna – You gotta fall in love with the city, one step at a time.

Here’s a guide to get you started in this uber-cool city!

Where is Helsinki in Finland?

The largest city and the capital of Finland, Helsinki is located on the southern coast of the Gulf of Finland. The most northerly of the capitals of Europe, Helsinki is often referred to as the white city of the north as most of its buildings are crafted using light-colored granite.

Spring (May and June) and Autumn (September and October) are the best times to visit Helsinki. Summer (July and August) is good but crowded.

The plus point of traveling in summer months is the great weather and long, mild, and warm days. We visited in July and enjoyed the long summer days. I mean, summer days just don’t end here. You can explore all day long. Isn’t it amazing?

How to Get to Helsinki

The capital and the largest city of Finland, Helsinki sits in Europe’s northernmost corner squeezed between Sweden and Russia.

You can fly or sail or drive into Helsinki depending upon where you’re coming from.

Helsinki-Vantaa Airport is served by all major international airlines to and from major cities around the world.

For a classic Finnish experience, fly with Finnair. We loved flying with them.

We recommend Kiwi.com for the best flight deals.

You can sail via the Baltic Sea from Sweden (Stockholm), Russia (St. Petersburg), (Tallin) Estonia, and even Germany.

Finland has a good road network. It’s easy to rent a car and drive into Helsinki from the other cities in Finland and from Russia.

You can also plan a road trip to Finland from other Nordic countries but that’ll include a ferry.

We recommend Auto Europe and RentalCars.com for all your car rental needs in Europe.

Helsinki Central Railway Station in Kluuvi has excellent train connections from all the major cities in Finland and from Moscow and St. Petersberg in Russia.

Helsinki’s Central Bus Station in Kamppi has regular bus service to and from all the large cities in Finland.

How to Get to the City Center from the Airport

I and P trains from the airport take about 30 minutes to the city center.

Alternatively, you can board Finnair City Bus or Airport Bus 615 from the airport to the city center. The night bus service (415N) is also available.

Taking a taxi is the easiest and fastest option but then it costs much higher.

How to Get Around Helsinki

Walking is the best way to explore the attractions in and around the city center. You can take a self-guided tour or a guided walking tour to explore the center.

Biking is the second-best way to get around the city. Check out the cycling routes in Helsinki.

The city has a zoned public transport system.

Choose a ticket that best fits your needs. If you’re sticking to the city center, you should buy a ticket for the main zone (AB) or for the Airport-Downtown (ABC) but if you’re planning a day-trip from Helsinki, you’d need a different ticket. Click here to know how to use a public transport system in Helsinki.

I’d suggest you buy a Helsinki Travel Card that allows unlimited travel for the duration (24, 48, or 72 hours) on all the modes of transportation – trams, buses, the metro, trains, and Suomenlinna ferry.

Helsinki Card is another awesome option. It not only allows free, unlimited travel on all the modes of public transportation but also gives free access to a ton of attractions and museums in Helsinki.

Trams are the best and most beautiful way to explore the center of Helsinki.

Public buses are also an efficient way to travel from one location to another in Helsinki but not helpful in the center of the city. Trams make sense there.

Helsinki’s metro system is the world’s northernmost and has two lines – M1 (Matinkylä–Vuosaari) and M2 (Tapiola–Mellunmäki) that serve about 25 stations.

What to do in Helsinki

There are some beautiful places to visit in Helsinki. We have a complete post about the best things to do in Helsinki, Finland for you.

Walking (tip: take a guided walking tour) the center of the city is mandatory, you see. You can also ride the sightseeing tram to get pally with the city. Island hopping and café hopping remain the quintessential things to do in Helsinki.

Take a dip in the Finnish sauna to get off the tiredness of the sightseeing before you dine in at delicious Finnish cusine.

And, how can you not check out the impressive Finnish design and architecture? You must plan a visit to the Design District Helsinki.

Where to Stay in Helsinki

We stayed in this spacious 50s house with a wood-heated sauna in Lintuvaara, Espoo, and loved every bit of it. Our host Marko and his family were welcoming and helpful.

It’s away from the center but the bus stop is just a few meters away from the house. We boarded a bus that dropped us at Sello mall and then a train from Leppävaara train station to the Central Railway Station to reach the center of the city.

If you want to stay near the city center, check out these best hotels right in the heart of Helsinki.

For those who wanna luxe it up, we recommend Hotel F6, Hotel St. George Helsinki, and Lapland Hotels Bulevardi.

If you prefer living like a local like us, there are a ton of lovely apartment options, like this Apartment Hotel Aallonkoti in the heart of the city, this stylish studio in Ullanlinna, this artist apartment in Kallio, or this cozy, super-cute apartment in Vironkatu.

What and Where to Eat in Helsinki

Finland
Scandinavia Summer Tours
We mostly visit a place only once in our lifetime. In Scandinavia and in Norway, The Lofoten Islands...
9 D · 8 N
Deal of the day
10%
off 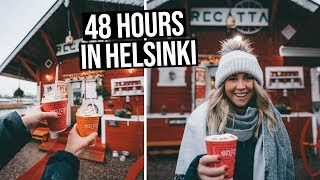 Finland
Video showing First Time travel guide to Finland | 48 Hours in Helsinki
We have arrived in Finland for the very first time and we are so excited to kick start our winter Ch...
GET QUOTES