A great story about gujari mahal – celebration of raja man singh’s love for mrignayani, Read about the things to do in gwalior for a perfect travel experience.
T
Travel Melodies

Raja Man Singh Tomar is memorialized eminently for the peace and glory he brought to Gwalior and for his love for Mrignayani, his ninth wife. His love story becomes a legendary tale.

Raja Mansingh’s relationship with Mrignayani was special. Not only was he smitten by her beauty, but he also shared her passion for music. Consumed by his devotion to the love of his life, he built the Gujari Mahal.

He even dedicated a classical raga to her beautiful Gujar wife which he called Gujari Todi. Mrignayani learned music from Haridas, the celebrated musician in Man Singh’s court. Raja Man Singh and Mrignayani would enjoy music performances together in an underground music hall in Gujari Mahal.

So Goes the Story…

Raja Man Singh came vis–à–vis with beautiful Gujjar girl named Ninni on a hunting expedition. Some say she was hunting a buffalo while others say she was rescuing two buffaloes by untangling their tangled horns.

Completely impressed by the blend of beauty, strength, and courage; the king right away fell in love with her and asked her to be his queen. The beautiful and headstrong Gujar girl agreed on her own terms. She put forth three conditions:

The king agreed and married Ninni. He named her Mrignayani – the gazelle-eyed one. The enamored Raja Man Singh built an aqueduct to bring water from the river to Gwalior. It was difficult to get water to travel uphill.

He built her a separate palace at the foot of Fort hillock. Gujari Mahal is within the Gwalior Fort premises a little away from the main palace.

There are different stories about the construction of a separate palace. I observed guides and locals just sort of making stuff up. Nothing is as such clear.

History gets lost somewhere in these made-up stories. Legends say (technically, our guide said) the reason behind the separate palace was Mrignayani’s wish to live in a palace built just for her with 24 hours water supply from the river Rai when in fact locals say that Mrignayani’s palace was built away from the main palace because of her lower caste status. So much for enduring history.

Sadly, their story was short-lived. Like all love stories, this story too ended in a tragedy. Man Singh’s eight queens did not accept Mrignayani (again guide’s imagination maybe) and their fathers felt disgraced for their son-in-law had married a girl of a lower cast.

They pulled back their aid. Islamic invaders (Mughals) attacked the fort; Man Singh and his beautiful wife were killed in the battle owing to lack of proper support and armies. Unwilling to submit to the invader, the other eight queens jumped into the pits of fire and ended their lives.

Gujari Mahal is located at the eastern gate of the fort called Gwalior Gate or Quila Gate. The narrow and dirty lanes took us to a huge gate. The palace gate and the passage that leads to the Gujari Mahal was thronged with locals.

The forecourt was occupied by the little boys who were enjoying the game of cricket. I began to felt if that’s really the way to the royal palace. I inquired with one of the boys who responded with a nod of the head for he didn’t want to adjourn the game because of my sudden interruption.

A huge gate with two guardian lions on either side welcomed us as we walked past those boys.

The journey into the fascinating history starts from here for within every finger-breadth of the courtyard and in every gallery/room lie beautiful antique sculptures.

Today, the Gujari Mahal is an Archaeological Museum managed by the Directorate of Archeology, Archives and Museums, Madhya Pradesh. It’s also called the State Archeological Museum or Gwalior Fort Museum.

It’s a treasure trove of ancient heritage and exquisite sculptures collected from various places some dating back to the 1st and 2nd centuries BCE. The place literally stuns you.

The palace was converted into an archaeological museum in 1920 and was opened for the public in 1922. It houses around 28 galleries with almost 9000 antique pieces.

The architecture of the stone monument is just breathtaking. Built in the 15th century in a traditional Hindu style architecture, the square palace has an open area in the center.

The Persian inscription at the entrance narrates the story of the making of the Gujari Mahal.

The palace is adorned with colorful mosaic tiles similar to the ones used in Man Singh Palace. The stone segments of the palace are beautifully engraved with artistic patterns using elephants, peacocks, and skylights (latticed windows).

The dome-shaped umbrellas in the outer area of the palace add to the beauty. Each and every adornment has a special significance. 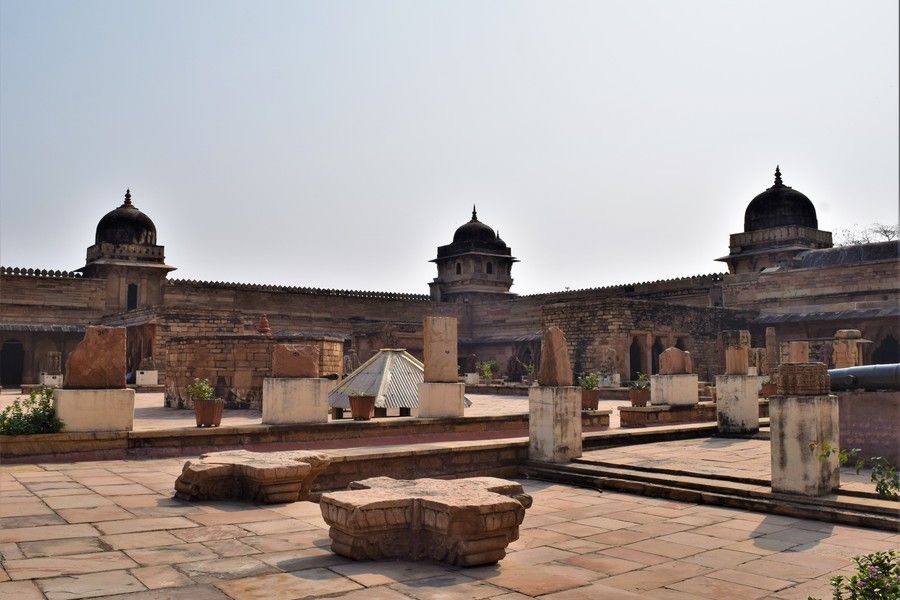 The collection of vintage coins is mind-boggling. The museum puts on show the vast variety of gold, copper, alloy and silver coins dating back to as early as 300 BC.

Sculptures from Suhania, Mitawali and tree Goddess are worth seeing. The depiction of the birth of Lord Krishna is beautiful.

Among the most striking artifacts are a large, late 9th to the early 10th-century sculpture of the Shalbhanjika Yakshi from Gyraspur (Indian Mona Lisa) and figures of Nataraja Ardhanareshwar and Yama.

The rare 6 armed sculpture of Mahishasura Mardini of Gupta Period from Besnagar where the goddess is majestically walking over a buffalo head in samapada posture holding the pigtail of Asura grace the Gujari Mahal museum.

The museum also showcases the life and times of the great musician of Gwalior, Tansen. The sound of music once reverberated the palace.

A panel dating back to the 5th century from Pawaya that depicts the dance and music forms of the Gupta period is noteworthy.

The open courtyard of the palace houses many historical gems that include the sculptures of Mahismardini Durga, Ganesha, Shiva, Vishnu, Surya, Saraswati, Jain Tirthankaras, Naikas and many more. The carved pillars look out of the ordinary.

Another stunner includes the 75-year-old photograph of the ancient city of Mandu, Dhar.

The replicas of the frescoes of Bagh caves and a figurine of Genghis Khan are other interesting artifacts.

A beautifully carved railing caught my attention. The curator told us that this vedica once encircled a Buddhist Stupa at Besnagar. It depicts the significance of Buddhist religion through carved motifs.

Apart from the artifacts, different kinds of ancient weapons like cannons, swords, guns, and bow/arrow are housed in the dungeon of the palace. The curator also showed us the pipe that brought the water of the Rai river to the palace.

Each and every masterpiece preserved in the Gujari Mahal speaks volumes about the extraordinary skills of artisans of the bygone era.

Curator took us around and narrated the stories behind the Mahal and various artifacts on display. He was soft-spoken and humble.

We praised him and offered money for his services as a guide; he smiled and said: “Atithi Devo Bhava” (The guest is equivalent to God). We were speechless. Incredible India indeed! You’ll end up falling in love!

One of the things that capture and entrap you about India is its ceaseless ability to flabbergast you.

The visit to the Gujari Mahal was overpowering and out of this world on many diverse levels. Believe me, It will make you coo “wow” and hurt you with its charm!

The palace is located at the eastern Kila gate right in the middle of a busy market. The narrow lanes make it difficult to park a car. It’s better to take an auto or taxi to save the hassle.

The best time or season to visit the Gujari Mahal is winter (October – March) hands down.

Gujari Mahal is open from Tuesday to Sunday from 10 am to 5 pm. It remains closed on Mondays.

Gwalior
Gwalior - The Rich Heritage Tour
Get Gwalior Tour Packages at budget price with TrueHab. Tap to get travel benefits as best offers on...
3 D · 2 N

Gwalior
Student Tour to Gwalior
Explore all the top tourist attractions in Gwalior with Student Tour To Gwalior. Book Gwalior Tour P...
3 D · 2 N
Deal of the day
10%
off

Gwalior
Sun Temple (Surya Mandir) in Gwalior – Not Just a Replica
What comes to your mind when I say Sun Temple in India? Konark? Of course, that&rsquo;s my first tho...

Gwalior
Deo Bagh by Neemrana - affordable luxury in the royal city of Gwalior
I spent a long weekend in Gwalior, the capital city of the erstwhile Scindia dynasty, and simply lov...

Trip to the Island country of South East Asia, Singapore
Singapore, my very first foot step in this country made me realize its highly impossible to find ano...

India Backpacking Guide: Highlights + Best Places to Visit!
India polarizes like no other country in the world – one loves it or one hates it. The colors, the s...
GET QUOTES