Kasol: A venture land ready to offer whatever you are seeking

A great story about kasol: a venture land ready to offer whatever you are seeking, Read about the things to do in kasol for a perfect travel experience.
L
LetUsGoTo

I have always wondered why Kasol is not as famous as other hill stations are. After all, it’s a home to snow clad mountains, possesses the beautiful landscapes, a pleasant weather to die for and is undoubtedly, a picturesque hill station to spend vacations at. And as we are told always, the answers are only given to those who seek them through their actions, I got mine during a recent trip to Kasol.

Kasol is a place having its own rules and definitions and hence is not everyone’s cup of tea. It is an experience rather than a journey. A congenial journey only for those who can blend in to what it offers. Here is what I discovered during my Kasol expedition:

Kasol is also known as Mini Israel as it witnesses a large number of Israeli tourists. Many of them have inhabited Kasol and hence to the other’s favor, one can also savor the taste of Israeli food in any of the eating joints. Banners in Hebrew language can be easily spotted throughout the city.

The best thing about the hippies is that they enjoy their lives to the fullest like there is no responsibility or boundation to care about. They eat as well as dance heartily!

Kasol runs on café culture, luring tourists towards its authentic ambience and famous local dishes. One can spend worthwhile times here by hanging out with friends or reading a book enjoying the surrounding beauty. Also, don’t miss to order some fruit juice, the one freshly prepared with pulpy fruits is enough to get you going around for the whole day.

I also tried waffles and pancakes and the desserts just served me right. Another café I went to was around the lake side and served fancy candlelight dinner which was lovely.

3. The villages with rules

Tosh and Malana are the two villages in Kasol worth paying a visit. People of Malana consider themselves as one of the most ancient civilizations and hence they don’t let other folks touch them or their walls as it might make them impure. Despite all this, Malana is famous because it grows the best marijuana in the world. People of Malana have their own lifestyle and social structure and people strictly follow their customs.

Tosh is not much different than this. Situated at a higher altitude, Tosh is high on offering stunning views and breathtaking locations. I passed along the wet way owing to the melting snow and also spotted some fresh snowy chunks over the slopes, that made my visit worthwhile. A trek of 3 kms revealed a lovely waterfall and the chilling water made my feet totally numb but I enjoyed every bit of it.

Kasol is famous for growing high quality wild charas, a hand-made hashish. Malana cream is the specialty of the place having high oil content and an intense aroma.

If there is a ‘specialty’ being supplied, the demand completes the business cycle. Marijuana is easily available at the known spots and is popular among all, be it the tourists or locallites. Everyone has his own way to get it and savor the after-effects in some time.

5. The Parvati river – A witness to all

Parvati valley is the essence of Kasol. A beautiful river of clean waters gushing through big rocky stones forming white ripples and froth is an eyesome sight to live and even die for.

I was lucky enough to wake up early and getting the chance to capture its morning fresh views. On the river side, I sat over a stone dipping my feet into the river. The water was cold but the early rays of the sun were getting me warmed simultaneously, to my favor.

Kasol
Enthralling Beauty of Kasol Package
Explore the best tour of Kasol package and get the best Itineraries, Sightseeing, Food, Accommodatio...
4 D · 3 N
₹4900 ₹4410
Deal of the day
10%
off

Kasol
Into the Parvati Valley
I am approached by a sun burnt white man, a huge backpack resting on one of his shoulders as I am wa...

Kasol
Top 10 Places to Eat in Kasol
Kasol is one of the top tourist destinations in Himachal, and a trip to Kasol involves a number of c... 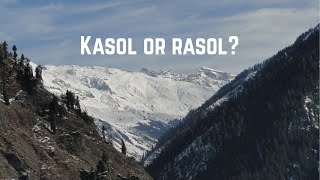 Kasol
Learn about Top 5 Places To Visit Around Kasol In Kullu-Manali
Kasol is a small yet beautiful suburb located on the banks of river Parvati in the peaceful habitat... 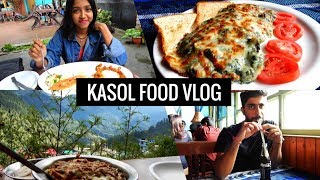 Kasol
Learn about Kasol Food Vlog | Best Places To Eat In Kasol | Indian Food | Indian Street Food
Here's your guide to what and where to eat when in Kasol, Parvati Valley.
GET QUOTES