Laguna 69: Day Hike to The Lake Without a Name

There is something about waterbodies:

The reflection, the tranquillity, the way they are naturally placed among surrounding mountains and valleys that make them so alluring.

Throw in some animals grazing on the grass and the whole scene is postcard perfect.

Waterfalls, lakes, rivers… They always make me stop and stare.

The Laguna 69 in the Cordillera Blanca mountain range of Peru is one of them.

I arrived in Huaraz after spending a week in the lowlands of Nazca, Huacachina and Lima. Huaraz is known as the trekking mecca of Peru (and rightly so), but before some multi-day treks, I figured I’d go for a couple of day hikes as a warm up.

I’ve heard of the famous Laguna 69 - one of the most visited lakes in the world - and signed up for a tour the next day. Three other backpackers in my hostel room, who just arrived too, joined me on this trip.

We left the hostel at 5am on a tour bus fully-packed with tourists and after a quick non-included breakfast, we stopped at a stunning turquoise lake for a quick photo.

Commonly mistaken as Lake Llanganuco, the photogenic Lake Chinanconcha is actually one of the two lakes in the Llanganuco Valley. It’s claim to fame: for being the poster-lake for Huascaran National Park, as the image on the park ticket.

The Huascaran National Park is home to the Cordillera Blanca and all the multi-day treks and day-hikes, home to majestic mountains and stunning lakes.

The 2-3 hours bus ride brought us past many winding roads and snow-capped mountains, with Mount Huascaran dominating the landscape as the highest peak in Peru (6768m).

Our guide explained that when the Huascaran National Park was officially formed, there were over 400 lakes and while many were named, others were left unnamed. This particular lake that we’re visiting happened to be the 69th on the list and since then, it has been called Laguna 69 (Lake 69).

It was drizzling when we got off the bus at the trailhead. At over 3000m, the region around Huaraz has unpredictable weather. We were all at the mercy of Mother Nature.

Everyone walked at their own pace; some more acclimatised than others and some hungry to be the first to lay their eyes on the famed lake.

It felt good to be stretching my legs after the few hours on the cramped bus, walking along the river and next to countless cows and horses on the way.

Polylepis trees – the only ones that can survive above 3000m – lined the way. Their orange-red bark looked like they were tearing off.

Less than 30min in, I was gasping for air.

The trailhead starts at 4000m and ends at 4600m above sea level and is touted as a 3 hour hike up. After having spent over 5 weeks at Cusco and trekking in the high altitude over there, I thought this would be an easy trek.

Afterall, I completed one of the toughest trek in Cusco and also the 5200m hike to Rainbow Mountain.

And yet, I was struggling.

Has that ONE week in the lowlands undone all the acclimatisation?

Was it possible to lose it all so soon?

I stopped many times to catch my breath, to drink water and to regain my composure. Keep fvcking going, Owen.

The first third of the trek wasn’t THAT tough honestly. It takes you through flat green plains and winding stream crossings with strategically placed rocks before reaching the first set of switchbacks.

These switchbacks were long but gentle. It wasn’t the steepness but the altitude that slowed me down. As if to make up for it, Mother Nature presented spectacular scenery while we hiked up the trail.

My favourite of all were the two tall waterfalls cascading down the sides of the cliff, adding a touch of white to the grey mountains. Have I mentioned that I love waterfalls?

At the top of the switchback we were greeted by a lake. But no, it wasn’t Laguna 69! Just a small, black lake; as if placed there just to cheat our feelings.

Past the lake is a huge open yellow plain, flat and easy. The patterns on the grass looked like aliens-placed crop circles or the enigmatic Nasca lines.

It wasn’t just the altitude being higher than when we started, the switchbacks got steeper, clouds covered the landscape and the terrain was more challenging. The hardened mud path became a gravel path – the worst kind that makes you easily lose your footing.

At least the rain stopped. But it was still cold and windy.

While huffing and puffing and struggling up the gruelling switchbacks, I didn’t forget to admire the -pardon my lack of vocabulary – stunning, gorgeous, beautiful landscape around me.

The towering mountains and valleys may impress everyone, but the little purple flowers along the way were the ones that caught my attention.

This was why I came:

To reconnect with nature, to be present to the moment, to appreciate the little things in life.

I felt rejuvenated each time I stopped to admire the landscape. It wasn’t long before I caught the first glimpse of the otherworldly blue among the grey and white of the surrounding mountains and rocks.

The lake was stunning; with its magnificent turquoise blue encircled by the icy peaks of the snow-capped mountains. When the sun shines, the shade of blue changes.

Few brave souls stripped to their bathing suits and dived into the freezing water. The others simply sat around and stared at the splendour of the lake.

Both lakes carry a magnificent turquoise blue that changes according to the position of the sun. Both are surrounding by snow-capped mountains. Both are challenging uphill hikes.

I prefer the Humantay Lake. Laguna 69 seemed more monochrome-ish to me, whereas Humantay looked more vibrant. Also, it is possible to climb up to a ridge above the lake to get a view from above. It’s not possible here at Laguna 69.

Nevertheless, Laguna 69 still is beautiful. There was a tiny waterfall, flowing from the thawing glacier above the lake; a nice little embellishment.

The hike to Laguna 69 is not a loop, which means you have to return on the same path. The rain stopped, and the view from above is more spectacular.

This trek is one that embodies the saying: It is not the destination, but the journey that matters. Indeed, the journey to the top had a better view. 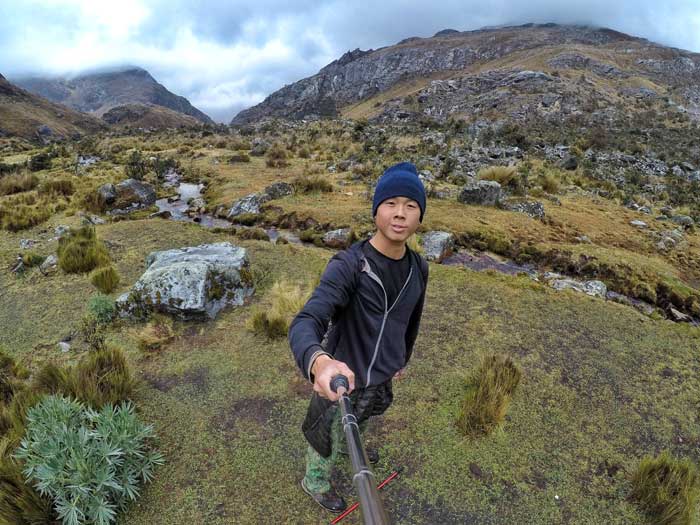 It was a fitting introduction to the Huascaran National Park, one where I’d spend the next week or so exploring.

Many backpackers prefer doing treks independently to save costs. But this is one I’d recommend going with a tour.

To get to the National Park, you first have to take a bus to Yungay, a nearby village, then a combi to the park. From there, you still have to find your way to the trailhead.

When you add up the costs, you don’t save much. I paid PEN $40 (USD $13) for the tour but the hostel probably makes a small commission. If you book through an agency directly, you can find it cheaper.

Furthermore, the combis to the park do not have a fixed schedule and you might find yourself waiting by the road trying to hitch a ride back to Huaraz. Not a very ideal situation in the cold, harsh nature.

On a tour, the guide makes sure everyone leaves the lake by a certain time so the group gets back to Huaraz on time.

If you go on a tour, remember that food is not provided. Bring your lunch and some snacks and lots of water. Maybe even some coca leaves for the altitude.

Peru
Peru & Iguassu Tours
This is a shorter version of our South America tour. The 13 days spent on this tour will get you to...
15 D · 14 N

Peru
Nevado Mateo: My First Alpine Mountaineering Experience
I held on firmly onto the ice axe on one hand and stretched the other to pick up the metal hook my g...
Read More

Peru
Hiking Colca Canyon: One of the World’s Deepest
Day 2: It was 4:40 a.m. We started our hike in the canyon darkness. The full moon barely lit the wa...
Read More

Peru
Amazon River Boat: The Authentic Tour
My hammock rocks and sways as we make our way down the Amazon River in Peru. It&rsquo;s been a few r...
Read More

Peru
Pastoruri Glacier: A Song of Ice and Snow
Snow pelted against my poncho. Thunder rumbled in the skies. A curtain of white blanketed the land...
Read More

Peru
Chavin de Huantar: Peru’s Forgotten Civilisation
I like to travel not just to see and experience new things. But to understand and relive the experi...
Read More

Peru
Choquequirao Trek: The Real Lost City of the Inca
&ldquo;I&rsquo;m not going to Machu Picchu. I refuse to be around thousands of other tourists,&rdquo...
Read More

Peru
Sacred Valley Cusco: 3 Circuits for the Perfect Day Trip
&ldquo;Are we in the Sacred Valley yet?&rdquo; An American lady in my tour group asked, even though...
Read More

Peru
Vinicunca: The Colourful Rainbow Mountain of Peru
I stopped and gasped hard for air. My heart was beating faster than after a 100m sprint. I felt li...
Read More

Peru
Gocta Falls & Kuelap Ruins: Why You Should Visit Chachapoyas
My tour guide Jeffery turned to me and said, &ldquo;I&rsquo;m gonna first explain in Spanish to the...
Read More
GET QUOTES