A great story about mahe- a colonial french town, Read about the things to do in pondicherry for a perfect travel experience.
R
Reshma

Mahe overlooks the Arabian Sea as Mayyazhi River disgorges herself into it. Located at the mouth of the river, Mahe or Mayyazhi as it was earlier called, is all of 9 sq km. The tiny French colony which is a part of the union territory of Pondicherry is just 8 kms south of Thalassery, and was an important trading post of French East India Company during the 18th century. The colonial influences are not evident everywhere, but there are a couple of old buildings and structures which are a reminiscence of its French rule. The fort built by the French is presently in ruins.

Mahe Bridge separates Kannur district from the union territory and also offers a gorgeous view of the Mayyazhi River disembarking into the Arabian Sea. As soon as you cross over, a bevy of liquor shops welcome you, a frequent getaway for people from Thalassery and surroundings for a swig.

The famed St. Theresa’s church of Mahe attracts people of all religions from across Malabar. Built in 1736, colourful danglers and numerous frames adorn the interiors of this beautiful church. The festival in October is when people throng the church and streets of Mahe.

Though Mayyazhi doesn’t have a list of attractions, Tagore Park and its walkway are where all the action happens. The park is located adjoining the Mayyazhi River and its walkway runs parallel until it joins the Arabian Sea. Lined with tall trees, the park also houses the statue of Marianne, depicting the ideologies of French revolution. The walls of the park have a visual portrayal of the famed Malayalam writer, M. Mukundan’s ‘Mayyazhipuzhayude Theerangalil’ (By the banks of River Mayyazhi), probably his most famous creation.

The walkway has been well done up to give a glimpse of the colonial times with cast iron railings, nicely designed street lights and benches to enjoy the evenings. As the sun sets, the well lit up walkway is a gorgeous sight. Apart from the lovely sunset in the evening, one can also spot many birds frolicking near the estuary.

The walkway leads further to a hillock which has a watch tower and a lighthouse. The lighthouse isn’t open for public, but the watch tower offers panoramic vistas of the Arabian Sea, the beach and the swaying coconut trees. The hillock is well wooded with various trees and paths meandering through them.

Other than the walkway, the government house next to it is one of the prominent buildings where one can see the influence of the French architecture. The building currently has a museum which displays relics and artefacts from Mahe’s history.

The other popular attractions include water sports complex which offers boating facilities and remnants of Othenan’s fort.

Mahe might not be a long stop over for visitors, but a visit while in Thalassery is well recommended to know more about this small piece of colonial France in Kerala.

Northern Kerala, close to Thalassery (8 Kms). NH- 17 passes through Mahe and there are frequent buses connecting to Thalassery and Vadakara.

There are bakeries and small restaurants near the park. Mahe is known for its numerous liquor shops and bars (the taxes are subsidized as it is a union territory). It is recommended to stay in Thalassery, which has numerous budget and mid range options.

Pondicherry
How to plan a trip to Pondicherry | Quick Travel Guide
Pondicherry, also known as Puducherry, is one of the seven Union Territories of India and comparat...

Pondicherry
3 Days Trip to French Colony Pondicherry
Pondicherry is also known as Pondy or Puducherry, and it is one of India's eight union territories.... 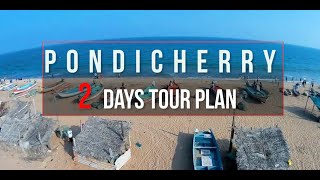