A great story about mount abu hill station – mount abu tourist places, Read about the things to do in mount abu for a perfect travel experience.
i
india travel guide

Mount Abu Hill Station – Mount Abu tourist places
In a region that is mostly barren, the Mount Abu Hill Station rises above the local landscape offering a picturesque landscape that is lush and green making it a virtual oasis in a sea of sand. The Southern tip of the Aravali Mountain rage sticks out into this desert region and it is the only hill station near by, but thanks to the lush foliage and cooler mountain air, Mount Abu is a place to get out of the heat of the sun.

The Mount Abu Hill Station is built up around a lake on Mount Abu and is rich in religious mythology. According to the local legend, a serpent who had descended to the region to save Shiva’s Bull was known by the name Arbuda and thus the mountain was named after it.

There are a number of archeological sites around the Mount Abu Hill Station due to the number of Dilwara Temples which were know to be located in the area. Furthermore, because of the ancient ruins below, a many number of artifacts can be found throughout the town. Most of these relics can be dated back as far as the Raj period in Indian history.

Gaumukh Temple
Visiting the Mount Abu Hill Station, you will find a number of great places which are a must see for anyone looking for some cultural enlightenment. One of these places is the Gaumukh Temple which features a natural spring that flows through a sculpted cow’s head. Also near by is the hill temple which was built for Arbuada the serpent that decended to save Shiva’s bull.

Adhar Devi Temple
If you are up for a little bit of exercise, you might want to stop by and check out the Adhar Devi Temple and attempt to scale its 360 hand carved stairs up the side of a huge rock atop which is the temple that was also carved into the face of the rock. While up there, you might as well watch the sunset and cast its golden glow on the surrounding terrain. It is an amazing site to see.

Honeymoon Point
You will get captivated by the sight of the lush plains and valleys from the Honeymoon Point, also known as Andra Point.

Gardens and Parks
There are a number of parks and gardens in Mt Abu providing you with natural beauty. Some of them are Shaitan Singh Park, Municipal Park, Terrace Garden, Ashok Vatika, Gandhi Park, etc.

Museum and Art Gallery
The museum and art gallery are located at the Raj Bhawan. A rich collection of archaeological excavations dating back to 8th-12th century A.D. is on display.

Nakki Talab
There is a legend associated with the Nakki Talab. It is believed that gods dug up this artificial lake using their fingernails (‘nakh’ means nail). There is also a Raghunath temple near the lake, dating back to the 14th century.

Shopping in Mount Abu is inescapable. Mount Abu has startling variety of artifacts and handicrafts for almost every kind of traveler, which is a treat for the visuals and are affordable to be picked. The number of shops roughly near Nakki Lake composes the main shopping centre of the place. To get the best handicraft and handloom products, Rajasthali-the Government emporium is the best place. Shopping in Mount Abu is truly an engrossing experience as the markets of Mount Abu are hoarded up with multiplicity of handicrafts from Rajasthan and the adjacent state of Gujarat. 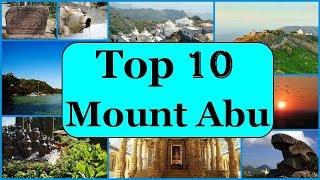 Kumarakom Houseboats: Things To Know Before Setting Out On Your Trip!
A Kerala Houseboat is one of the traditional forms of transportation that people have been using for...

Top 10 Beautiful Waterfalls In Kerala
Kerala, popularly known as the God’s own country, is also popular for the lakes and waterfalls. The...
GET QUOTES