A great story about mussoorie hill station, Read about the things to do in mussoorie for a perfect travel experience.
i
india travel guide

The area that is now the Mussoorie Hill Station was discovered back in the 1820’s by Captain Young and soon afterwards became a popular retreat for English Officials in the region. Its growth continued well into the 19th century and mid mid-century, the hill station began growing into a bustling resort town offering all the amenities of a ravish lifestyle. Of the many things in Mussoorie Hill Station, the Mall is considered to be the most famous as well as being the centralized part of the hill station.

From Mussoorie Hill Station, you can take a Ropeway ride up to Gun Hill which is the second highest peak around the station. The panoramic views offered atop Gun Hill are simply amazing. Not only can you see a birds-eye view of Mussoorie, but you can also get a glimpse of several peaks of the Himalayan Mountain Range. The name came from the use of the hill as a time keeper. In the older days, a gun was fired off during mid-day allowing people to synchronize their watches.

What hill station trip would be complete without stopping by and checking out the local plant life in the Municipal Gardens? The best way top get to the Municipal gardens though is to take the four kilometer trip by rickshaw. While you are at it, you can also take a horseback ride up to Childer’s Lodge atop the highest peak in the Mussoorie Hill Station region.

Around the hill station there are a number of aquatic sites to see as well. These include the falls like Jharipani, Bhatta and Kempty falls. The first two waterfalls are less than 10 kilometers from the hill station with the last one nearly 15 kilometers but well worth the trip as it is largest in the region with an altitude of almost 4500 feet.

The Mall Mussoorie
The Mall is the main shopping area in Mussoorie. The Mall road connects the two bazaars, Kulri and Library. It is the heart of the town. Along side the Mall is the tourist office, rows of Tibetan trinket and sweater vendors and shops selling walking sticks and cane items. Hand pulled rickshaws manufactured in Glasgow can be seen still here, plying down the Mall. The Mall is the starting point for the cable car towards the summit of Gun Hill, 2142 metres above sea level. On clear days, the peaks of Kedarnath, Badrinath and Nanda Devi from this hill can be seen here clearly.

Lal Tibba
Lal Tibba is the highest hill, situated at an altitude of 2438 meters above sea level. This hill is the highest point in Mussoorie. The view to the north and the snow capped peaks is stunning and best at sunrise.

Jwalaji Temple
The Jwalaji Temple is situated on the top of the Benog Hill and has an idol of Mata Durga. The temple is surrounded by the thick forests and offers a panoramic view of the Himalayan peaks, Doon valley and Yamuna valley.

Camel’s Back Road
Camel’s Back Road is suitable for horse riding, walking and beautiful sunset view of the Himalayas. A superb rock formation, with a life-like resemblance to a sitting camel can be seen from this spot.

Mussoorie
28 Best Places to visit in Mussoorie
Mussoorie is a famous hill station in the cusp of the foothills of the Garhwal Himalayan range of Ut... 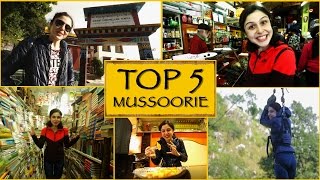 Mussoorie
Learn about the Top 5 Things To See/Do || Mussoorie
Here's our Mussoorie top 5!!! Enjoy.
GET QUOTES