Mysore – A Glimpse Of My City & Where to Go

A great story about mysore – a glimpse of my city & where to go, Read about the things to do in mysore for a perfect travel experience.
R
Reshma

Mysore is the city that I was born. I grew up watching the pompous Dasara festival, which attracts lakhs of visitors every year, spent countless evenings strolling in the lakes. One of the favourite college getaways was driving our bikes up to Chamundi Hills just for fun. In short, I can say that I lived and enjoyed Mysore like a true local, and the city has given me some of the best and the worst memories.

For a traveler, Mysore is one of the places that capture your heart and weaves a magical feel in your soul. Mysore leaves a lasting impression on the traveler with its compelling charisma and leaves one wanting for more.

The City has something to offer to all the kind of travelers – backpackers, slow travelers, solo travel, short family trips or for people just looking for a getaway to unwind and let their hair down.

The city, located about 140 km from Bangalore is known as the cultural capital of Karnataka. One visit to this marvellous city will let you know how aptly the title fits in. Mysore is rich in heritage and has a history dating back to about 300 years. For starters, Karnataka was known as the princely state of Mysore until the year 1950. The Wodeyars dynasty – known as ‘Maharajas of Mysore’ ruled the state and they inherit their lineage from the golden era of the Vijayanagar Empire.

For those who are visiting Mysore for the first time or for those new to this city, here are the places that I would recommend:

Mysore
Magical Mysore
See the historical sites and experience culture while relaxing in the lap of nature on this tour...
2 D · 1 N
₹6999 ₹6299 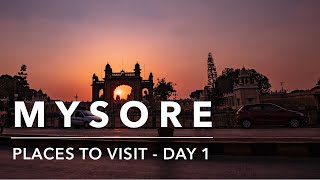 Mysore
Video showing Mysore - Places To Visit
Mysore is one of the most visited cities in India. In this video we will covering some of the must v...

15 Awesome Hangouts in Mumbai to Chill, ‘Work from Home’ and Enjoy Vegan Food.
I vaguely remember the first time I travelled to Bombay. I was still in my first year of college,...

10 Reasons Why a Visit to Paris Will Become Your Dream Vacation
General Holiday Destinations As Ernest Hemingway said – “There are only two places in the world...

Top Things To do In Varanasi
Varanasi (also known as Banaras, Benaras or Kashi) is one of the oldest living city in India. Named...
GET QUOTES