Places to Visit in Doha, Qatar

A great story about places to visit in doha, qatar, Read about the things to do in saudi arabia for a perfect travel experience.
N
Niranjan Das

Along the coast of Persian Gulf, the city of Doha stands tall as the capital of Qatar, and is one of the prominent cities in the Gulf region. Founded in early 19th century as a part of Al Bidda, the city became the capital of Qatar in 1971. The city has grown multifold over the years and has emerged as one of the major commercial and financial centres in the Middle East. Doha is also all set to host the Fifa World Cup 2022 and there is extensive work happening across the city in this regard. From hotels to stadiums to metro rail to malls, Doha is all set to make a mark for itself on the world stage. The striking skyline is adorned with spectacular skyscrapers and there are more such structures planned for the future. With all these lined up, Doha is sure to give a run for its money to Dubai in the coming days. However, the city isn’t known just for its contemporary structures as there are numerous traditions and cultures that Doha has held onto closely through its museums and cultural centres. A beautiful blend of modernity and traditional culture is what makes up Doha and that is quite evident across the city. While the country’s economy banks heavily on its oil and natural gas reserves, the city of Doha has also been portrayed as a tourist destination recently.

Qatar also offers a free visa on arrival to nationals of more than 80 countries in order to promote tourism. Here are a few must visit places in Doha.

Referred as the national mosque, the Qatar State mosque is named after the 18th century scholar, Muhammad ibn Abdal-Wahhab and is also the largest mosque in the country. Though the mosque was first built in early 20th century, it was refurbished and opened again in 2011. Designed in typical Arab architecture, it has more than 90 domes, 3 main entrances, 17 small entrances, and more than 12,000 people can offer prayer at a time. It also houses a minaret and large open spaces which offer nice views of the surroundings and the Doha skyline. The inside of the mosque has beautifully lined pillars and arches. Apart from the large prayer halls, there are also three in-house libraries. The mosque is open to people of all faiths and visitors are expected to be modestly dressed. Women must wear Abaya to cover their heads while entering the mosque. An ideal time to visit the mosque is in the evening it is well lit up.

Protruding into the harbour and next to the MIA park, Museum of Islamic Art is built on an artificial peninsula. The multi storeyed museum designed by I.M.Pei is a magnificent structure in itself with gorgeous Islamic designs and geometric patterns on its ceiling, and metal works dangling from the top. The museum houses a plethora of items from world over, some of which are more than 1400 years old. The galleries in the museum are a treasure trove and have a huge display of ceramics, glassware, metal works, manuscripts, textiles, wood work, calligraphic compositions, patterns, floral motifs, scientific instruments and other collections related to Islamic art. The museum also has a gallery dedicated to Syria, showcasing its rich history and cultural heritage. MIA as it is sometimes referred as, also has a café and a gift shop. The door to the left of the main hall leads to an open space which offers spectacular views of the blue waters and the West Bay.

Adjoining the Museum of Islamic Art is the beautiful MIA park with palm trees, large manicured lawns, walkways, food trucks and splendid views of West Bay. This large green space faces the waterfront and is an ideal place for an evening stroll or for the kids to play. A landmark here is the steel structure known as 7. The evening sky is a delight to watch from here as shades of red and pink splash across the blue sky and waters. West Bay on the opposite side is a business district with numerous structures and buildings which get lit up as the sun sets.

A walk along Al- Corniche, which is 7 Kms long offers panoramic views of the waterfront and the West Bay. Numerous traditional Dhows can be spotted here, both moored and cruising its way through the waters. A Dhow cruise at night is a wonderful experience where one can enjoy Arabic music as you go past the tall glittering buildings.

Despite the large malls that have sprung up across Doha in the recent times, the Souqs remain an integral part of the culture of the people of Doha. Souq Waqif which has been restored as a traditional market is an absolutely delightful place with its vibrancy and ambience. Numerous shops which sell an array of items are lined together along the narrow alleys of the souq. From fabrics to blankets to spices to souvenirs to sheeshas to carpets to pottery, the souq offers myriad items. Souq Waqif has been wonderfully restored and maintained as it conjures up images of a 19th century market. One can either shop or laze around through its labyrinth alleyways taking in the charm of the market. There are numerous restaurants and cafes where one can relish the local cuisine. Visitors can also smoke a sheesha and see the world go by. There is also a falcon souq and a horse stable within Souq Waqif. The open spaces in the souq also turns into a cultural stage occasionally when dance and music performances are held. The souq remains open late into the night but remains shut in the afternoon from 1PM to 4 PM.

The cultural village of Katara offers a blend of world culture and houses sand coloured buildings in Arabic architecture, two beautiful mosques, galleries, opera house, theatres etc. Katara has been promoted as a stage for cultural exchanges and art exhibitions. The Katara mosque and Golden mosque are gorgeous and known for their brilliant art work. Located by the bay, the sea and the beach nearby further accentuate the charm of the place. There are numerous cafes and restaurants here that offer varied cuisines.

The Pearl Qatar is luxury built on a manmade island with beach villas, apartments, hotels, cinemas, yachts and malls. Targeted mainly at the ultra rich and elite class, The Pearl is reminiscent of Palm Islands in Dubai. Visitors can however stroll through the promenades, relish varied cuisines at the restaurants, enjoy the setting sun or visit any of the boutiques. A walk along the Marina offers wonderful photo frames. There are also dinner cruises on a traditional Dhow from The Pearl.

Al Fanar is an Islamic Cultural Centre which also houses a mosque. The library here has an array of books related to Islam in various languages. The place is recommended to visit if one would like to know more about Islam and its traditions. With a spiral minaret, the structure is an iconic one in the city and is located close to the corniche. It was once the largest mosque in the country until the Qatar State mosque got revamped.

Desert Safari is a popular adventure one can enjoy in Doha. Dune bashing in a 4X4 over the endless sand dunes is an absolute adrenaline rush. Lusail Marina walkway which is located near the yacht club has a lovely waterfront promenade and is ideal for an evening stroll. Doha has a host of shopping malls (Doha Festival City mall, Mall of Qatar, Villaggio mall etc.) and numerous restaurants that serve a wide range of cuisines such as Middle Eastern, Indian, Continental etc.

Qatar Airways is the country’s major airline which connects Hamad International airport with various destinations across the globe. Taxis are easily available and Karwa taxis are the best way to travel within Doha. Uber taxis are also operational in the city. Doha Metro is expected to be functional this year. There are public buses to commute within the city but they aren’t frequent.

The city has numerous restaurants and cafes that serve an array of cuisines from world over. Alcohol is served only in select hotels and restaurants. Doha offers a wide range of options with regard to accommodation from budget stays to luxury resorts.

Saudi Arabia
Saudi Arabia Visa for 2020 Travel: What You Need to Know
This post is a sponsored collaboration between Don&rsquo;t Forget To Move and Online Visa. All vie...

Saudi Arabia
Watch Top 10 Most Amazing Places In Saudi Arabia
Situated in the Asian continent, Saudi Arabia is the country known for its beautiful valleys, striki... 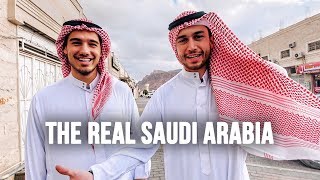 Saudi Arabia
Learn about the Visiting The Real Saudi Arabia
First time visiting the country. I'm giving you my thoughts and if I say things that are not true or...

Best Things To Do in Gdansk, The Coastal town of Poland
Gdansk was one of the first cities that I came across while researching on the best things to do in...

Here are some Offbeat yet Awesome Things to do in Thailand
It is an undeniable fact that there is no better place to let your hair down and party your heart ou...

21 Things To See In Wroclaw, the Unique City of Poland
Looking for things to see in Wroclaw? Then, you have come to the right place. And if there is a city...

Things To Do In Hanoi – How I Spent 48 Hours in Vietnam’s Capital
I started my Vietnam trip of 25 days from the south, beginning from Ho Chi Minh. Hanoi, the capital...

Having a Leh’dback Time
The scenic highways of NH1D andn NH21 lead into Ladakh will take you the the charming little town...

My Parisian Life – Karishma writes about her recent tryst with Paris
Paris is known as the city of lights and if you spend enough time, you realize it is a cauldron for...

Things to do in Udaipur | 21 Awesome Reasons to visit Udaipur
Udaipur is a beautiful and captivating city, loved by the people of India and the entire world. Ther...
GET QUOTES