A great story about samad's island of peace, srinagar (hotel al samad), Read about the things to do in kashmir for a perfect travel experience.
S
Siddhartha Joshi

One fine evening I was invited by my gracious hosts to join them for a tea at the grand hotel - Hotel Al Samad, right in the middle of Nageen Lake. The place is also more commonly knows as 'Samad's Island of Peace'.

I was living in the city almost like a local (I could take the fancy touristy shikara only once), and simply loved these small and raw looking taxis. They are almost human and the boatsmen generally love their boats. We haggled a bit for the prices and agreed for a ridiculously low sum. Since I was with Kashmiris, this was not tough and they our boatsman agreed for a ridiculously low price (I would have easily paid more than twice of that)!

The boat usually drops you and goes back to look for other customers, and when you have to go back you can stand at the small jetty and wave another boat! So cool, eh :)

Tip: The other option is to tell the boatsman that he will need to pick you as well (especially if you go there just for a dinner). You can call them once you are close to done and they will come over and take you back to the land. Kashmiris are very trustworthy and you can take their word for this :)

We actually reached the hotel when the sun was still up and bright and that gave me ample opportunity to explore every corner of the garden and click some real crappy pics (I didn't have a DSLR then). Since its a hotel, I behaved myself and made sure I didn't disturb any of the guests, though the place looked quite empty then.

Settling down later in our chairs in the front garden, we sipped tea, looked at the beautiful setting sun and discussed politics, among other things. Two things that interest me a lot are History and Politics, and people here are always more than happy to discuss both of these :) There is so much you can discover about Kashmiri aspirations over coffee, and I could completely relate to them as a human. It was all sensible talk, not rhetoric that we see and hear on TV and read in newspapers.

A few boatsmen with flowers in their boats came along as they saw me clicking, and tried selling me a few of their absolutely gorgeous flowers. I was poor and declined :)

I was already in love with the hotel, and its difficult not to be. Its beautiful architecture, all wooden interiors (the front stairs are particularly impressive) and its pristine location all add to the allure of the place. But to me the most amazing part was the lack of noise - you could even hear the water in the lake, and that's pretty much all you heard, apart from the occasional bird sound.

The island also has a very old mosque, though many who visit the place do not know about it. Its small but worth a visit. Make sure you ask your hosts to show you around and take you to the mosque.

The original building is more than one hundred years old, though the original family which owned this has now moved to Pakistan. During the second world war, the hotel was frequented by the American and British officers and this was a golden time for the hotel when it grew and flourished.

As India and Pakistan fought bitterly for control over the Kashmir valley in 1948, the place was shut down. It became functional again only in the year 1981 after the family decided to rebuilt and open once again though unfortunately this was again short-lived. As militancy started in 1989, the hotel was shut down once again.

It was only a decade back (2004) that the hotel opened once again and shorted hosting tourists. The unique location of the hotel as well as the fact that its the biggest island of its type in the lake, makes it unique. Living here is almost like living in history.

Samad's Island of Peace is located within the Nageen Lake, the only way to reach there is to take a local boat-taxi which the locals use and not the fancy shikaras which tourists love :) There are not difficult to locate, but you will need to negotiate with them a little to get a good price. If you are near Hazrat Bal, it's only few minutes of shikara ride away.

Kashmir
Kashmir Holiday Trip
Jammu and Kashmir is the northernmost state of India. In the seventeenth century the Mughal emperor...
7 D · 6 N
₹14400 ₹12960
Deal of the day
10%
off 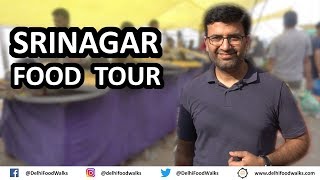 Kashmir
Learn about the Srinagar Food Tour I Kashmiri Cuisine
Kashmir's Wazwan is famous all over the world but besides Wazwan there are a lot more food option yo...

Kora House: Perfect Hideway For Solitude Seekers In Dharamsala
Sits perfectly in the arms of mighty Dhauladhar range, Dharamsala is a splendid hill retreat with...

Suryagarh - Stay like Royalty, Explore like a Local
A huge bird flew in front of us across the barren desert landscape. The wingspan was at least 2 mete...

Deo Bagh by Neemrana - affordable luxury in the royal city of Gwalior
I spent a long weekend in Gwalior, the capital city of the erstwhile Scindia dynasty, and simply lov...
GET QUOTES