Khwaja Garib Nawaz Dargah at Ajmer, Rajasthan, is the most celebrated tomb in India. It is located at the foot of Taragarh Hill. The shrine of the Sufi saint – Moinuddin Chisty, which is also known as Ajmer Dargah Sharif or Ajmer Sharif.

People of all faiths visit and rever the teachings of Moinuddin Hasan Chisti, who came to be known as Khwaja Garib Nawaz for preaching humanity. Devotees offer “chadar” to get blessings of the Sufi saint.

Like Akbar, the mighty kings of India also paid their homage to the great Sufi Saint apart from ordinary people. The shrine derived its name Gharib Nawaz (the benefactor of the people), due to its charitable works.

You will see Mughal architecture in several courtyards, daalaans, and tombs. The tomb is constructed with white marble. It has 11 arches, and you will see Persian inscription of Quran verses on the walls of dargah with Allah's names. A silver platform surrounds the actual tomb in a marble dome.

Victoria Hauz, Aulia Masjid, Nizam gate, Begami Dalaan, and Jama Masjid are the main structures inside the Dargah. Huge Buland Darwaza is the main entrance to the Dargah.

Massive cauldrons are inside the courtyard to cook food and kheer on some of the special occasions. Qawwalis are sung every day in the hall of Mehfil-e-sama inside the dargah after performing namaz.

Of three gates to reach inside, the first gate is ‘Nizam Gate.' Mir Osman Ali Khan, the 7th Nizam of Hyderabad, built this large gate.

Further, the next door is Shajjahani Darwaza, which Shah Jahan built with carpentry.

Sultan Mahmud Khilji built the third and last door in 1455 AD to enter the main campus. It is 85 feet high.

Emperor built this beautiful red stone mosque in 1570 to celebrate the attainment of a son. It was built in the same year his son was born.

Shah Jahan built the impressive Shahjahani Jama Masjid in 1640. Shahjahan loved architecture and built many buildings during his lifetime.

In 1192, Sufi saint Khwaja Moinuddin Chishti came to Ajmer from Persia. He is one of the spiritual healers of the world. The Sufi saint was born in 1141 in Iran.

He was amongst the most significant spiritual leaders of the world of his times. He remained unattached to the material world and settled in Ajmer to teach humanity the best way of high living. Saint surrendered his entire life for the welfare of the poor and persecuted people.

Sunni Sufism has a sect Chishti, which gained ground around 930 in Chisti village of Afghanistan. The sect emphasized openness, tolerance, and love. After propagating Sufism in Iraq and Iran, he entered India via Lahore in 1192 to spread this method in India. He restored Chishti Order in India in the mid-12th century.

Khwaja Saheb died on March 15, 1236 AD, and rested at the dargah after death. He laid stress on the unity of Hindu and Muslim communities. Muhammad Bin Tughlaq was the first individual to visit the dargah in 1332.

Ajmer Sharif Dargah draws pilgrims from far corners of the globe for the fulfillment of wishes. If you pray with a pure heart, your wishes will be granted.

As per belief, saint locked himself for 6 days before his death, so devotees observe his death ceremony for 6 days. This famous event takes place at the dargah every year. Sweet kheer is prepared in giant cauldrons and distributed among devotees.

The scores of pilgrims flock to Ajmer on the death anniversary of the saint.

The belief prevails that if you visit Ajmer Sharif and pray with loyalty and pure heart, you will free your soul.

Legends have that a murderer came to bump off the saint at the behest of some people. The saint sensed his intents with his intuitive powers. The murderer turned into a devotee and prayed to the saint. Saint forgave him. He became a follower of Islam under the influence of the saint.

Er. Boola Khan
Ajmer Sharif Dargah is 2 kilometres away from the main central Ajmer Railway station. Dargah Sharif Ajmer It is believed that a person who prays with a pure heart at the Ajmer Sharif Dargah, gets all his or her wishes fulfilled. Ajmer Sharif is a Sufi shrine and one of the most visited places in Ajmer. The pious Persian Sufi saint, Khwaja Moinuddin Chishti who is well-known for its secular preaching is enshrined here. Many Muslims believe that Moinuddin Chisti was Muhammad’s direct descendant and it was on his request (Muhammad came to his dream) he went to India. His shrine was built by Mughal Emperor Humayun, and in order to enter the dargah, you need to go through a series of massive doors made from silver with beautiful carvings. As you reach the courtyard, you would come across the tomb of Moinuddin Chishti, carved out of marble. It has gold plating on top and is guarded by a railing made from silver and a marble screen.

Lakshya Banthiya jain
Volume of mic is very high at night after 12:00 but beautiful place

Naved Mansuri
India's most popular dargah. This is a religious place. Any person who wishes to go here can go without any stopping. There are crowds of foreign visitors abroad throughout the year. Every year a grand Fair of Urs is organized here. At last this is good place.

Arjun S
I am an hindu but God Allah 🙏 has given me good friends who are Muslims ☪️ and I have life time opportunities to visit this holy place and get blessings for God Allah
Find multiple Ajmer Holiday packages, Budget Ajmer Tours, Family and honeymoon Ajmer trip packages .

Why is Khawaja Ajmer Sharif so famous?

It is the most well-known Muslim pilgrimage center in India. Ajmer in Rajasthan recounts the Islamic history and heritage. Khwaja Muin-ud-din Chishti established prime Sufi order in India. The shrine attracts millions of devotees who seek the Sufi saint’s blessings.

What is the legend about Ajmer Sharif?

Ajmer Sharif was the abode of the Sufi saint Khwaja Moinuddin Chishti between 1192 and 1236 AD. Mughal emperor Humayun constructed the shrine or tomb. Later, subsequent Mughal rulers Shahjahan and Akbar also built mosques in the complex. ...

What dress code should I follow for Ajmer Sharif?

While paying homage to Khwaja at Ajmer, you ought to wear loose-fitting clothes like cotton. Your attire must conform to the religious leanings and sanctity of the place. ...

Women have free access to the sanctum sanctorum of the biggest dargah in Ajmer Sharif. People from all faiths can enter the shrine. ...

When revered religious figures like dervish or Sufi saint die, a shrine is built over their grave. This shrine is known as dargah. People visit the shrine for ziyarat (pilgrimage)....
Get upto 30% Lower Prices
Please check the form below for errors

Junagarh Fort is located in Bikaner, Rajasthan. The fort was initially known as Chintamani. In the e...

The Mahakal Temple in Darjeeling is located on the summit of the observatory hill and definitely it...

One of the top tourist attractions in Darjeeling, this Observatory Hill is known for its Buddhist an...

If you plan to visit Uttarakhand, Then why only religious places? This state also offers many aspect...
Jaigarh Fort

Jaigarh Fort is a majestic citadel perched on the top of the ‘Cheel ka Teela’ of the Ara...

Deriving its name from one of the most revered gods in Hinduism, Ram Jhula is another famous suspens...

Hill Palace is the largest and first-ever museum in Kerela. Located in Tripunithura, it is built in...

We all need a break from our daily busy life. The only way to get rest is to go somewhere and see so...

Rajasthan
Udaipur & Jodhpur
Are all travel plans set to go to Udaipur and Jodhpur? If so, we would like to present to you the to...
3 D · 2 N
Featured
Deal of the day
10%
off

Rajasthan
Wilderness of Rajasthan
Pretty much indisputably the most vibrant country on Earth, India can conjure up a multitu...
5 D · 4 N
₹16400 ₹14760
Deal of the day
10%
off 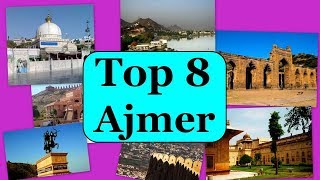 Video showing Ajmer Tourism | Famous 8 Places to Visit in Ajmer Tour
Explore the famous Ajmer tourist places and sightseeing spots for the best Ajmer tour experience. Some of the Top 8 Poin...
GET QUOTES