I visited India for the second time in eleven months to explore more of this gorgeous country, especially its unparalleled food scene. I spent eighteen unforgettable days traveling around seven different Indian cities with my friend Sam, and to say it was the trip of a lifetime is an understatement. I found myself loving this country more with each passing day and I hope my adventures there inspire you to experience the sights, sounds, and tastes of India for yourself.

When I say the Bahubali Thali is an absolute beast, I mean it! It’s beautiful and colorful, smells heavenly, and is enormous! The star of the dish is its paratha, a vast flatbread that clocks in at a whopping 20-22 inches across and is stuffed with ingredients like corn, green peas, nuts, and cheese. Served along with the paratha were seven different vegetables, a variety of breads including chur chur naan, two desserts including Gulab Jamun and Moong Dal Halwa, a lassi (Indian yogurt drink), a chaas (Indian buttermilk), and several sides (which included Pani Puri with mint and tamarind chutneys and curd, Katappa Biryani, Jeera Rice, and Boondi Raita). The paratha was spicy and full of flavors, and there were so many dips that I thought were outstanding. I didn’t know what all of them were, but I was able to identify two different types of dal, and there was an earthy, tomato-based one that had carrots in it that was out of this world, as well as another one I thought could possibly contain almonds and coconut. There was such a variety in flavors, from spicy to earthy to tropical, and I could not stop going back for more. Suffice to say, I was in Indian food heaven. The Bahubali Thali at House of Paratha is one Indian food experience I will never, ever forget. 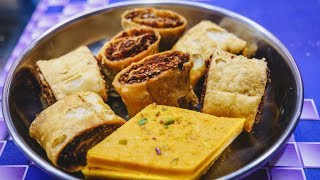 Pune
Weekend at Pune
Pretty much indisputably the most vibrant country on Earth, India can conjure up a multitude of conf...
2 D · 1 N
₹9100 ₹8190