Before I explored the states of Assam and Meghalaya in northeast India, I had heard that it was different from other parts of India in terms of food and culture. But nothing prepared me for how magical this area of the country is. It’s truly a hidden gem. Come along with me and let’s explore Assam and Meghalaya together.

After an incredible first day in Shillong, Meghalaya, my friend Paul and I headed out on a day trip to Cherrapunjee, a town that is often credited as the wettest place on Earth! I couldn’t wait to hit the road, eat, see some attractions, and explore Cherrapunjee. Let’s go! On our ride, we stopped to get some awesome views of Shillong before continuing on to the village of Mylliem to get some breakfast! We stopped at the tiny R. Kharbangar Tea Stall. There, we got 3 dishes including small flatbreads called pitha, chicken curry, pork intestines with liver, and dohklieh, which is pork salad with potatoes, ginger, and onions. I started with the pork intestines with liver, which had such an incredible mix of flavors. The sauce was mixed with sesame seeds and was out of this world. The intestines were soft and chewy, while the liver was dense. It was like a pork salad! Next, I took small pieces of the pitha (which is made of steamed rice dough) and tried them with everything. They were quite dense, a lot like a Venezuelan arepa. I loved it! Next was the dohklieh, which reminded me of ceviche. Then I went with the chicken and pitha, which had absorbed all the gravy on the plate. It was outstanding! I finished with some tea, which was very minty like the ones I’d had in Morocco and Jordan. Then I rinsed my hands and we left. Our entire meal only cost 160 rupees/roughly $2.28 U.S. From there, we got back on the road and headed south to Mawkdok. On the way, we saw lots of little houses as we traveled down the winding roads. It didn’t feel like India at all! Mawkdok was gorgeous! It’s a huge, picturesque canyon. Before we got some food, we stopped at a small shop where I bought a traditional Khasi scarf for only 180 rupees/$2.57. I was still hungry, so we got some prawn maggi at a nearby restaurant. It’s made with instant noodles, but they’re made the regular way. We had our choice of two sauces: a spicy one and a sweet, tomato-based one that was like an organic ketchup. The spices in the maggi was really nice and I loved the crunch. They were the best instant noodles I’d ever had! It was so unique and I loved the sauces with it! Best of all, it was super filling! Our entire meal cost about 360 rupees/$5.14. Then we were off to Cherrapunjee! The road was extremely winding and stopped to climb some stairs along the road to get to an amazing viewpoint where we could see the surrounding valley. It was stunning! I raced Paul to the top and then needed a breather when I got there! Then we continued toward Cherrapunjee. We passed through the town of Laitryngew, which is where the first missionaries who came to India arrived and started a school. It looks almost like Africa here. It was dry at the moment, but monsoon season was on the way. As we continued toward the town, we saw an amazing, rocky landscape that was pockmarked with little holes and pools. Then we went to see the Wei-Saw-Dong Waterfall. You have to be careful as you walk down the steep, rocky, path and follow a trail to get to them. There’s also a lot of litter here. Please don’t litter! The waterfalls were so worth the trek it takes to get there. We saw them from afar first and headed down another treacherous path to see them up close. The falls are gorgeous. I’ve never seen a waterfall like this with three pools and drop-offs! Then we visited Dain-Thlen Falls, which reminded me of something out of Jurassic Park! The views of the canyon were breathtaking. I also laid down near the edge and just breathed. But now it was time to get to Cherrapunjee. 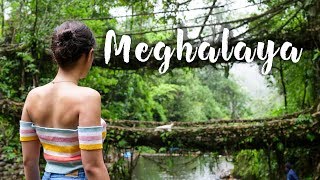 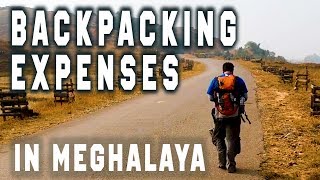 Learn about How I Planned Meghalaya | My Itinerary And Expenses
This is the summary of my whole trip including my expenses and itinerary which I planned a...
Read More