Here are our top 10 picks: #1 0:18 MONTMARTRE Artists such as Picasso or Van Gogh found inspiration in beautiful streets and atmosphere of Montmartre. Don’t miss Sacré-Cœur basilica with amazing views of Paris, Moulin Rouge, etc. #2: 1:15 NOTRE-DAME This famous medieval gothic cathedral from 13th century is located on the island Île de la Cité. Visit also Conciergerie, a former medieval royal palace and a prison during French Revolution. #3: 2:15 CATACOMBS OF PARIS The ossuary known as the catacombs date back to the 18th century when the remains of over six million people were moved into underground tunnel network of former stone mines to reduce the growing number of cemeteries. #4: 2:54 EIFFEL TOWER It is one of the most recognized world attractions and most-visited paid monument in the world. It was constructed in 1889 by the company owned by the engineer Gustaf Eiffel as the entrance to the 1889 World’s Fair. Including the tip, Eiffel Tower is 1,063 ft (324 m) tall and is the tallest structure in Paris. #5: 3:48 MUSEUMS Paris is home to over 100 museums. Some of the most popular are Louvre with Leonardo da Vinci’s Mona Lisa, Les Invalides including the tomb of Napoleon, Pompidou Centre, Musée d'Orsay and others.

#6: 4:44 CHAMPS-ÉLYSÉES The Avenue is a 1.2-mile-long (1,9 km) street located in the center of Paris and is considered to be one of the most recognizable avenues in the world. It features numerous luxury shops, theaters and cafés. At Champs-Élysées ends with Arc de Triomphe. #7: 5:36 PARKS AND GARDENS Luxembourg Gardens, Bois de Vincennes, etc. Paris is full of beautiful city parks and gardens, such as, Tuileries Garden, Luxembourg Gardens, Bois de Vincennes and others.

#8: 6:29 PÈRE LACHAISE CEMETERY Established in 1804 is the largest cemetery (110 acres, 44 ha) in Paris and is supposed to be the most visited cemetery in the world. The cemetery is a resting place of numerous world-famous figures including Jim Morrison, Édith Piaf, Balzac and Oscar Wilde. #9: 7:04 LA DEFENSE It is Europe's largest business district containing many of Paris tallest buildings and a large shopping mall with numerous restaurants and movie theaters. La Défense features an impressive modern architectural masterpiece La Grande Arche #10: 7:42 VERSAILLES It is an impressive royal residence of the king of France and Château de Versailles is now a UNESCO World Heritage site. 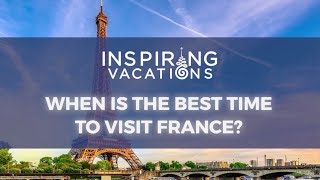 Video showing Best Time To Visit France
Interested in travelling to France, but want to learn more about the seasons.
Read More 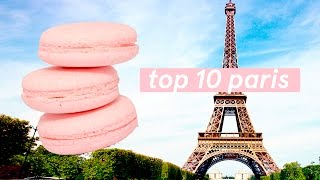 Watch Top 10 Paris Food Tour Guide Foods You Must Eat In France Street Food + Affordable Options
What to eat in Paris! Where to eat in Paris! My food diary! Here are the Top 10 things you...
Read More

France
Flavoured France
Are you too planning to explore the beautiful tourist attractions in Paris? If the answer is yes, he...
5 D · 4 N